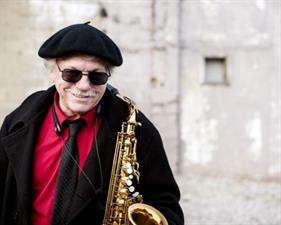 Special event – $20 admission for ALL

Over the years, Cole has also performed with the likes of the Manhattan Transfer, pianist Bobby Enriquez trumpeter Freddie Hubbard, saxophonists Sonny Stitt and Boots Randolph, as well as jazz vocalist Nancy Wilson — to name just a few. He has performed at iconic venues such as the Village Vanguard and Carnegie Hall.

Born in Trenton New Jersey, Richie Cole started playing the sax at age 10 when someone left the instrument in his father’s jazz club. Cole and his Alto Madness Orchestra are now based in  Pittsburg.

After picking up that sax as a child, Cole started playing with local bands and orchestras until he graduated from school. Recognizing his talent, Downbeat Magazine awarded him a full scholarship to the Berklee School of Music. Influenced by Charlie Parker and Sonnie Rollins, Cole started his professional career in 1969 when he joined the Buddy Rich Band, followed by the Lionel Hampton Band and the Doc Severinsen Big Band.  In 1975, he and the great Eddie Jefferson, vocalist and lyricist, teamed up and worked together for several years, performing, recording and collaborating, until Jefferson’s death four years later.

Cole organized the unique Alto Madness Orchestra in the 1990s, which has a big band sound using only seven instruments. Cole and the Orchestra have performed globally — in Australia, Japan, parts of Africa, Finland, Russia and throughout Europe.  His numerous recordings include the hit album “Hollywood Madness” in 1979 (featuring Eddie Jefferson) and his tribute to Leonard Bernstein, “Richie Cole Plays West Side Story” in 1996. More recently (2018), in recognition of Julian “Cannonball” Adderly, Cole and his Alto Madness Orchestra released “Cannonball”, which includes one of Cole’s many original compositions. The album, like five before it, was recorded on Richie Cole Presents, his own label. In all, Cole has been involved in the release of more than 50 albums and CDs.

Cole’s knowledge is revered at university and college master classes and the Alto Madness Orchestra course has entered its sixth year at the University of Madrid in Spain. Among Cole’s other accolades and achievements are: Appointments to the National Jazz Service Organization and the National Endowment of the Arts (serving as the chairman for one year), being awarded the State of California Congressional Certificate of Lifetime Achievement in Jazz on behalf of the Temecula Jazz Society, being listed in Maruis Who’s Who in America (2006) and delivering a command performance for the Queen of England. And, like the Queen, you now have a chance to hear the sweet sound of Richie Cole’s Alto Madness in person.

OPEN TO THE PUBLIC – General Admission – pay online or at the door.

$20 ADMISSION for members of the Space Coast Jazz Society

Food and beverages are available for an additional cost. The Rockledge Country Club is located at 1591 S. Fiske Blvd., Rockledge, FL 32955. For more information email Jazz@SpaceCoastJazzSociety.org or call Bobbie at (321)960-4897.